A Message from Jim

My life is an adventure and the gongs are such a great part of this trip!

Although I would never consider myself a musician, I have a tremendous affinity for math and numbers, the unseen, and an overwhelming sense of awe at the ancients' understanding and mastery of the physical as well as mysterious with math as an integral component - everything connected by this music, this sound, this vibration...

Although we have been hosting gong baths together as the Gong Lab for several years, our connection to these gongs started long before on a thread that continues to this day.

I thought it started with the full moon drum circles in Woodstock, NY in the early 90's, or sneaking into the fresh water of the Split Rock in the 'Lost City' of New Paltz in the middle of the night to suspend ourselves in the cold spring and sound of the rushing falls while Josh Doolittle played his didgeridoo...

It may have truly started with reading "Magnum Opus of the Gong" or other of the 'inch wide and mile deep' books of Grand Gong Master Don Conreaux and listening to CD's of his "Mysterious Tremendum" turned into the great honor of studying with him in person over many hours over the years.

Maybe it started with some of the YouTube videos of Gong Master Richard Rudis and thinking about his life changing experience in Vietnam that perhaps led him to the Gong, as well as exploring the lore of Gongs used in the re-entry of Greek warriors back into society after long campaigns, and eventually became our honor to have the Gongs participate in Yoga Across America for American veterans and service members. 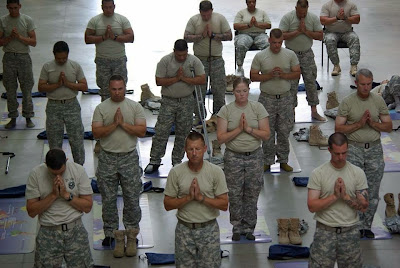 The math of the Gongs is not my original idea by long shot. Although I have joked in the past, "Woke up early this morning for a sustained 126,22Hz... Laughing out loud at feeling "Pleasantly Pythagorean" and thinking about the Mundane Monochord..." It wasn't until our formal training that we began to understand the connection to Pythagoras and Kepler, The Musica Universalis or Harmony of the Spheres that had driven us specifically towards our "Tuned Planet Gongs".

Eventually, Nick and I would put pen to paper, and write out the new sounds we'd intend to create: 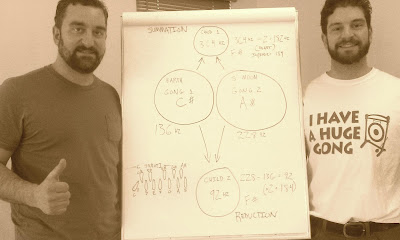 The Gongs are not all science for me. I have an exceptional ability, something I almost cursed when I was a kid with less control over it, for Multi Sensory Lucid Imagery. This too is part of the long thread for me as it now has become a major part of my Intention as we guide small and large groups through the journey. 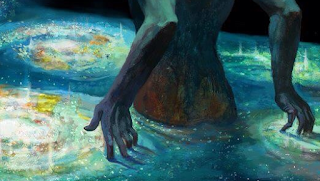 Although we intend participants to be able to dissolve their ego and float in Akasha with new sense of boundless existence; we as hosts must maintain our Intention and not get lost during the trip. I often do this by consciously intending participants to feel certain things I have felt many times - Sometimes simply physical and generically relaxing, like feeling the gravity of the moon on our liquid body effecting us as it does the sea, sometimes above us and sometimes on the opposite side of the planet or the heavy slow swirl of the earth's molten core catching up with it's shell's rotation...

I then focus on each participant until I feel truly connected to them from the point of view of the String Theory (a simple description of Elegant Resonance), seeing them them first as their whole physical (half their true mysterious being), then imagining them at the cellular level and eventually seeing their most micro existence, their vibration, then intend to consciously align these, to encourage a harmony using the power of the Gong for health, healing, and happiness. 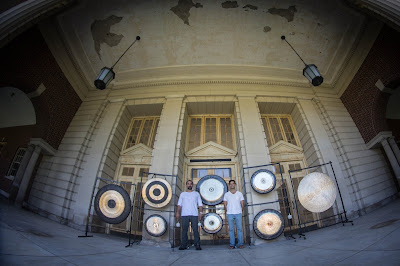 Although we often refer them as "our gongs" we understand that they are not our possessions by any means and this is just a fleeting time and place where we happen to be together.

We have often referred to our beloved "Walter" as our most prized possession as it was carried by Don and created by Gongbaumeister Walter Meyer towards the end of his life, but we know that we will only be a small part of this gong's story for a short time. Although many gong masters will inherit these gongs from us, perhaps for a 1000 years, they won't be here forever. Every strike and each passing day sees them disappear before our eyes on an atomic level.

Now is the time for us to enjoy them!