The Gong Bath to Support Coesa and Roosevelt II in Saratoga Springs!

Sometimes being a gong master means getting to do really awesome things. This past Sunday we had an event to raise money for Coesa at the Roosevelt II bathhouse in Saratoga Springs, NY. Coesa has made it their mission to bring the Roosevelt II bath back to life. Roosevelt II a cool old Victorian age Greek revival bath house in the heart of the Saratoga Springs State Park. The bathhouse has been empty, unused and neglected for 30 years until this wonderful non-profit group has made it their mission to bring it back to life.

The setting was simply awesome. An old brooding building, rusting and worn with magic in it’s bones. The healing history built around the stone columns of this Greek revival building made this feel like we were part of something special, part of history. The gongs dovetailed nicely in the setting and we had an awesome, inquisitive crowd.

Each Gong event is different and this one was energetic and revitalizing.The Gong Lab is not a formal non-profit but Gong brother Jim and I do not take a profit from of efforts. We simply roll all the income directly back into buying more gongs. Doing a fundraising event for Coesa, who has the great mission of bringing the Roosevelt II back to life was an honor and felt much more important than just accumulating more gongs.

This is more than a hobby, it’s a shared labor of bliss. We have a home in the gongs, and a place where we can be gong geeks. Our own little weird place in the world, and everybody is invited.

Thanks again for all those who took part, and for Coesa for bringing breaking life, vitality and healing into our lives.

Each of the publications below has a gallery of the event 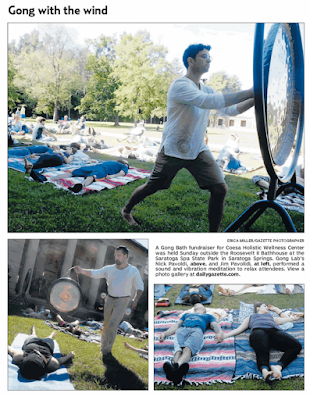 Wow, we woke up this morning to a great article in the New York Times about Gong Baths making the move from "Metaphysical to Mainstream"

This is such a great affirmation of our beliefs as we've been hosting Gong Baths for years and it's always refreshing to see that we're not alone in the Gong Universe!

Dr. Helen Lavretsky, a psychiatry professor at the Semel Institute for Neuroscience and Human Behavior at the Geffen School of Medicine at U.C.L.A., and a Kundalini yoga instructor, has practiced sound meditation for 11 years, using it for older adults with memory problems, among others.

She said that participants will often fall into a state of profound relaxation and wake up refreshed. “Deep mental and physical relaxation would decrease sympathetic and will increase parasympathetic autonomic nervous system tone and response, thus decreasing stress response,”

The article mentions the Integration, Temple of Intuition, and Jamie Ford of The Sound Space.

It's exciting to see Gong Bath's going mainstream, especially considering some of our recent decisions to house a number of our Gong's at Nick's new Bodywork Professionals office on Spring Street in downtown Saratoga Springs. We've dedicated an entire room to massage and Structural Integration simultaneously with the Gongs.


We are preparing now for a Gong Bath in the Saratoga Springs Spa State Park at the Roosevelt II baths.  This amazing building has the potential to be destination for sound healing events in New York and is being rehabilitated by the Coesa crew who is dedicating their energy to rehabilitate this wonderful building. We went for a visit last weekend to prepare for a fundraiser on August 23rd at 10am.

Jamie Rock, of JRockVision got some video of our rehearsal last weekend: