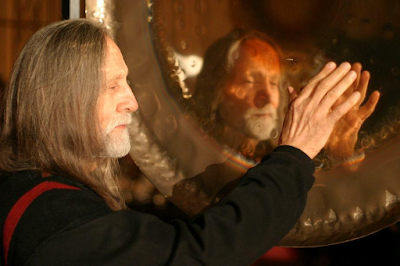 Don Conreaux is our teacher, author, and the Grand Gong Master.

We strongly encourage anyone interested in taking their practice to the next level to visit Don's websites, read his books including "Magnum Opus of the Gong", participate in any of his events globally, and to train with him in almost any of the dozens of countries he visits in rotation with his Gongs.

From his "Holistic Resonance" bio page:

Master Don was one of the five original Kundalini Yoga Teachers designated by Yogi Bhajan in 1969. Don also studied the gong writings of Dane Rudhyar.

He established the Nanak Dwara Ashram Teacher Training 1970-1976 in Phoenix, Arizona.
Don received his Kriya Yoga Initiation in Los Angeles in 1952 while studying the teachings of Paramahansa Yogananda at Self Realization Fellowship.

Don originated:The Gong Yoga of Holistic Resonance, the title of Gong Master, Gong Therapy, The Gong Bath, The Gong Puja, and Gong Master Training in the Way of the Gong.

Don has produced students of the gong in many countries of the world since and holds trainings internationally. He also conducts his Mysterious Tremendum Gong Consort and Sacred Tone Ensemble.

His Way of the Gong writings include: Gongs of Our Solar System, Magnum Opus of the Gong, Music of Wholeness, The Gong Essays, Sacred Geometry of Starhenge, The Chiometer, and The Kriya Kundalini Gong Yoga Manual.